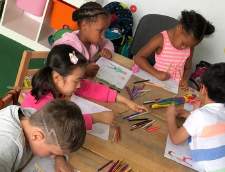 About our school: The ABRAKADABA Spielsprachschule and our method were founded in 1997 in Hamburg. We are the market leader in the field of early language acquisition in Germany. It is primarily for children aged 3 to 12 that learn at our school. We are presently represented in different cities in Germany and abroad. In the different cities during the school years the ABRAKADABA schools do have mobile play-instructors to come to kindergardens, elementary schools or private households to offer playful group or individual classes to children. German and English Daycamps in Hamburg: During the school holidays we are offering exciting daycamps for children ages 4-12 years in Hamburg. For the children its a joyful journey in a new world, far away from the stresses of everyday life. In fact, its loads of fun here with us! What do the kids need? Only time daily from 9 to 16:30! The camps are completely in English or in German. Previous knowledge of the language is however not required. After our daily excursions in the morning, we concentrate in the afternoon through different age appropriate activities and games on the children’s language development. Everyday along with our different themes, we use playful ways to bring the children into a natural way of speaking. The children recieve multiple opportunities to use their natural impulse to communicate in a foreign language. Through these opportunities the active language competence is strengthened and developed. The children are divided up into age groups, so that the themes can be planned and carried out for the appropriate ages. While the younger children play more simple games, hear stories, color and craft to play and learn the language, the older children have more complex topics and discuss them in a foreign language. You will recieve a concrete plan before every camp week. This way your children have not only an unforgettable holiday experience, but also will profit from the language input, and parents don’t have any worries about their child’s supervision during the school holidays, kita closures or while vacationing in Hamburg. Also, at the end of every camp week, there’s a special presentation for the parents, where the kids can present some of what they have learned—a great ending to an exciting week! The activities vary from camp to camp and week to week so that is possible for the children to participate in multiple camps. The more intense the language input, the better the child’s language abilities will be after the camp weeks. We are excited to report more than 98,2% customer satisfaction from Summer 2019! About our ABRAKADABRA method: From the time of its birth every child has acquired the natural abilities to learn a language. They can imitate the sounds they hear, then understand words and later form sentences before finally mastering the language fully. These skills can also be tapped for a second or third language which then penetrates, like the mother tongue, via another section of the brain into much deeper layers than an additional language learnt in later years. There is a good early language learning possibility which has proved its worth in Canada for the past thirty years. In this so-called immersion method children are thrown into a language bath where they first splash around and then start swimming with pleasure. A language is learnt by moving around in that language, by living in it. It has been scientifically proven that different areas of the brain are activated when small children and adults are learning. When children learn languages, the same part of the brain is involved as when they learn their mother tongue. However, according to the principle of Total Physical Response it is considerably easier for them to learn a further language in conjunction with the perception of all senses. In the children's language school we avoid artificial communication as in conventional language lessons. Language is taught without any classical textbooks. Children play in whatever language they are learning. Our children enter a new language world playfully and effortlessly and without being overtaxed learn a foreign language with all their senses seemingly quite involuntarily.